Lady Gaga is an American songwriter, singer, actress, dancer, philanthropist and fashion designer. The Pop icon is best known for her hits like “Bad Romance,” “Judas” and her debut album, ‘The Fame,’ which achieved remarkable success and was certified as 3x Platinum in USA. Her accolades include six Grammy Awards, two American Music Awards, and various BRIT Awards. She won a Golden Globe Award for her acting role in the television series American Horror Story: Hotel in 2016. Born Stefani Joanne Angelina Germanotta on March 28, 1986 in Manhattan, New York City, to Cynthia Louise and Joseph Anthony Germanotta, Jr., she has a younger sister, Natali Germanotta. She is of Italian descent on her father’s side, and of half Italian and half French-Canadian, English, German, and Scottish descent on her mother’s side. She wrote her first piano song at the age of 13, and started performing live at 14. At age 17, she attended New York University’s Tisch School for the Arts but left to find creative expression. She became engaged to her boyfriend, actor Taylor Kinney, in February 2015. However, they broke up in mid-2016. In 2017, she began dating talent agent Christian Carino. 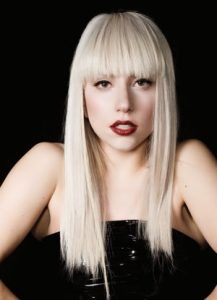 Lady Gaga Facts:
*She was born in Manhattan, New York City on March 28, 1986.
*At age 4, she learned to play the piano.
*She got her stage name from the song “Radio Ga-Ga” by Queen.
*She studied music with an emphasis on “pop.”
*She is a big fan of Britney Spears.
*She supports the gay community.
*Her role model is Madonna.
*She was a classmate with Paris Hilton at Convent of the Sacred Heart.
*She ranked #92 in 2010 and #99 in 2011 in FHM’s 100 Sexiest Women in the World editions.
*She cites Madonna, David Bowie, Judy Garland, Freddie Mercury, Björk, Liza Minnelli, Grace Jones, Cyndi Lauper, Yoko Ono, Britney Spears and Michael Jackson as big influences.
*Visit her official website: www.ladygaga.com
*Follow her on Twitter, Facebook, YouTube, Myspace and Instagram.