Hunter King is an American actress. She is best known for television roles such as Adriana Masters in Hollywood Heights, Summer Newman in The Young and the Restless and Clementine Hughes in Life in Pieces. She received a Young Artist Award and a Daytime Emmy Award for her work on The Young and the Restless. She has also appeared in Hidden Hills, Hannah Montana, Line of Fire, Without a Trace, Dexter, and ER. Born Haley Ashley King on October 19, 1993 in Ventura County, California, to parents Jamie and Terry King, she Has three sisters including older Kelli King and younger Joey King. She began her professional acting career appearing in such series as Roswell, Hannah Montana and Workaholics. In August 2018, King got engaged to her boyfriend of two years, Nico Svoboda. 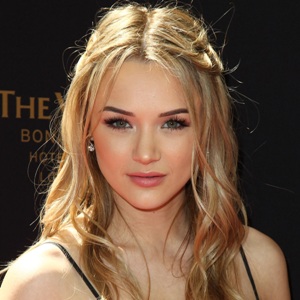 Hunter King Facts:
*She was born on October 19, 1993 in Ventura County, California, USA.
*Her family is of both Christian and Jewish background
*She acted in a theater in Agoura Hills, California at a young age.
*She plays guitar very well, writes songs and sings.
*Follow her on Twitter and Instagram.