Iggy Azalea was born Amethyst Amelia Kelly on June 7, 1990 in Sydney, Australia and was raised in Mullumbimby. She is a rapper, who rose to fame after releasing music videos for her songs “Pu$$y” and “Two Times” on YouTube. She won a 2014 American Music Award for Favorite Rap/Hip-Hop Artist. Iggy was the first international and female rapper to make XXL’s annual Top 10 Freshman list and later appeared at the 2012 BET Hip Hop Awards Rap Cypher. She has a perfect body which measures breast 33, waist 24 and hip 37. She has a height of 5 feet and 10 inches which is around 178 cm. 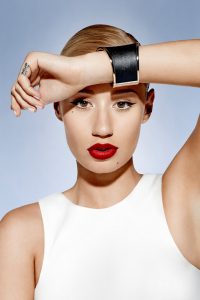