Ignazio Boschetto is a tenor from Italy. He is best known for being a member of the operatic pop trio Il Volo alongside Piero Barone and Gianluca Ginoble. In 2016, the group released a tribute album to the Three Tenors titled Notte Magica. Boschetto performed with Il Volo on the 10th season of American Idol as a guest appearance. Born on October 4, 1994 in Bologna, Italy, to parents Caterina Licari and Vito Boschetto, he was raised in Marsala, Sicily. He has a sister named Antonina. 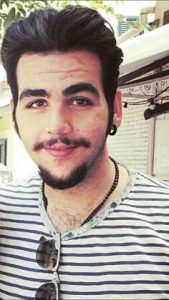 Ignazio Boschetto Facts:
*He was born on October 4, 1994 in Bologna, Italy.
*He became part of the operatic pop trio Il Volo alongside Piero Barone and Gianluca Ginoble in 2010.
*He was featured on the music video of Chino & Nacho’s Mi Chica Ideal in 2013.
*He is fluent in both English and Italian.
*He has a dog named Franz.
*Visit Il Volo’s official website: www.ilvolomusic.com
*Follow him on Twitter, YouTube and Instagram.