Katherine Moennig is an American actress. She is best known for her portrayal of Shane McCutcheon on The L Word, and for her role as Jake Pratt on Young Americans. In 2013, Moennig joined the cast of the Showtime series Ray Donovan. She also had a recurring role on Grownish on Freeform as Professor Paige Hewson in season 2 and 3. Moennig reprised her role as Shane McCutcheon in The L Word sequel, The L Word: Generation Q in 2019. Moennig’s other notable works include Three Rivers, Grown-ish, My Dead Boyfriend, and Default. Born Katherine Sian Moennig on December 29, 1977 in Philadelphia, Pennsylvania, to parents Mary Zahn and William H. Moennig III, she is of Irish and German descent. She is married to musician Ana Rezende. 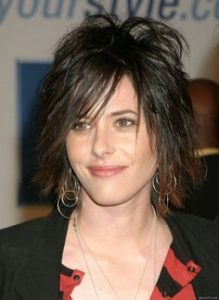 Katherine Moennig Facts:
*She was born on December 29, 1977 in Philadelphia, Pennsylvania, USA.
*She belongs to both Irish and German descent.
*She is the half-niece of actress Blythe Danner.
*She’s trained in fencing.
*She is openly a lesbian.
*Follow her on Twitter and Instagram.