Imani Hakim is an American actress. She is best known for her roles as Tonya Rock on the American hit sitcom Everybody Hates Chris, and Gabrielle Douglas in the Lifetime movie The Gabby Douglas Story. Hakim’s other notable works include ER, Chocolate City, Sharknado: The 4th Awakens, Sollers Point, Burning Sands, and Cam. Born on August 12, 1993 in Cleveland, Ohio, USA, she was raised by her father. She has five brothers. Imani studied acting at Cleveland Ohio’s historic Karamu House Theater, and appeared in many of its stage productions. She also studied at Alexander’s Workshop School in Lakewood, California and at The Young Actor’s Space in Burbank, California. She made her television debut in 2005, appearing in the hit TV show “Everybody Hates Chris”. 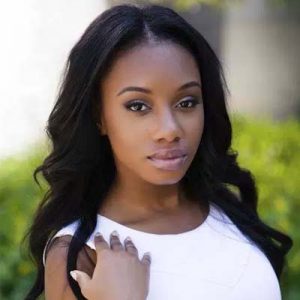 Imani Hakim Facts:
*She was born on August 12, 1993 in Cleveland, Ohio, USA.
*Her first professional job was in a McDonald’s commercial.
*She made her film debut in Reign Over Me (2007).
*She portrayed 13 year-old Olympic Gold Medalist Gabby Douglas in the Lifetime movie “The Gabby Douglas Story.”
*Imani was awarded “Youth Entertainer of The Year” for her dedication as a youth actor by the U.S. House of Representatives, United States Senate, The City of Los Angeles, The Los Angeles Police Department, and The Sheriff’s Department.”
*Follow her on Twitter, YouTube, Facebook and Instagram.