Tequan Richmond is an American actor and rapper. He is best known for his role as Drew Rock on the UPN/CW sitcom Everybody Hates Chris. From 2012 to 2018, he played TJ Ashford on the ABC soap opera General Hospital. He also played Ray Charles, Jr. in the motion picture Ray. Born on October 30, 1992 in Burlington, North Carolina, USA, to parents Temple Poteat and Anthony Richmond, Tequan moved to Los Angeles in 2001 with his family not intending to become an actor. He appeared in magazine ads such as Reader’s Digest, Sports Illustrated, Newsweek, and National Geographic. 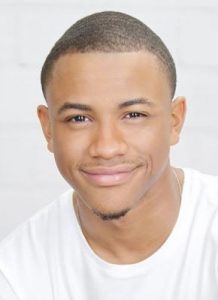 Tequan Richmond Facts:
*He was born on October 30, 1992 in Burlington, North Carolina, USA.
*At age 10, he moved to Los Angeles with his family.
*Aside from acting, he enjoys playing basketball, bowling, golfing, and traveling.
*His favorite basketball player is the legendary Michael Jordan.
*He has appeared in the music video “Hate It Or Love It” by 50 Cent and The Game as a young Game.
*Follow him on Twitter and Instagram.