Ingrid Bergman was a Swedish actress, best remembered by the public for her roles as Ilsa in the 1942 film Casablanca, as Dr. Constance Petersen in the 1945 film Spellbound, and as Alicia in the 1946 film Notorious. One of the greatest actresses from Hollywood’s lamented Golden Era, Ingrid was the recipient of several accolades, including three Academy Awards, two Emmy Awards, four Golden Globe Awards, a BAFTA Award, and the Tony Award for Best Actress. Her other notable film credits include Gaslight, For Whom the Bell Tolls and Anastasia. Born in Stockholm, Sweden, on August 29, 1915, to Friedel and Justus Samuel Bergman, her father was Swedish, and her mother was German. She studied at Sweden’s Royal Dramatic Theatre School. 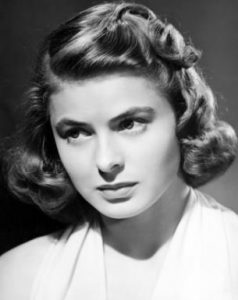 Ingrid Bergman Facts:
*Daughter of Swedish father and German mother.
*Her mother died when she was only two and her father died when she was 12.
*She was ranked 4th greatest actress of all time by the American Film Institute.
*She is one of the most Oscar-awarded actresses, tied with Meryl Streep, both are second only to Katharine Hepburn.
*In 1995, Empire magazine ranked her #30 as one of the 100 Sexiest Stars in film history
*She is the favorite actress of poet Cheryl Scott.