Ingrid Vandebosch is a Belgian model and actress who won the Elite Look of the Year Award in 1990. She has appeared in magazines such as Elle, Marie Claire, Vogue and Glamour. She had a small role in the 2004 film Taxi. Vandebosch appeared in Stuff magazine, in which she talked about her line of lingerie. She is also credited with a feature in the 2008 Sports Illustrated Swimsuit Issue. 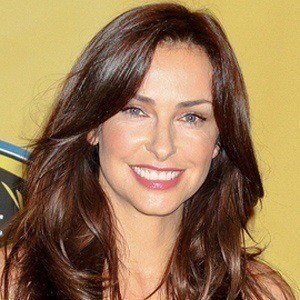 Born on November 8, 1970 in Zichen-Zussen-Bolder, Limburg, Belgium, Vandebosch began her career in Belgium in 1986 and was discovered by Parisian agents one year later. She married the NASCAR driver Jeff Gordon in a private ceremony in Mexico on November 7, 2006. They have two children.

Ingrid Vandebosch Facts:
*She was born on November 8, 1970 in Zichen-Zussen-Bolder, Limburg, Belgium.
*She won the Elite Look of the Year Award in 1990.
*She is the wife of the retired NASCAR driver Jeff Gordon.
*Follow her on Twitter, Facebook and Instagram.