Jimmie Johnson is an American professional auto racing driver who is a seven-time NASCAR Cup Series champion. Johnson competed full-time in the series from 2002 to 2020, driving the No. 48 Chevrolet with Hendrick Motorsports, before transitioning to open-wheel racing. He won five consecutive Sprint Cup championships from 2006 to 2010. He is also a two-time winner of the Daytona 500, winning in 2006 and 2013. Between 2002 and 2017, Johnson recorded seven championships, 83 career race wins, 222 top fives, 341 top tens, and 35 pole positions. 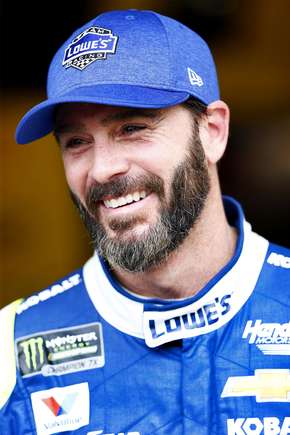 Born Jimmie Kenneth Johnson on September 17, 1975 in El Cajon, California, to parents Catherine Ellen Dunnill and Gary Ernest Johnson, he has two younger brothers named Jarit and Jessie. Johnson began racing on motorcycles when he was four years old. After graduating from Granite Hills High School he competed in off-road series. He began racing for Hendrick Motorsports in 2002. He has been married to Chandra Janway since December 10, 2004. They have two daughters, Lydia and Genevieve.

Books: On the Road, Looking Into Black Bottom: The Life Story of Jimmie A. Johnson