Iris Strubegger is an Austrian model who has appeared in campaigns for many important fashion houses such as Calvin Klein, Louis Vuitton, Dries van Note, Fendi, Lanvin, Versace, Dolce & Gabbana, Alexander McQueen, Christian Dior SE and Sonia Rykiel. She has been the face of Balenciaga, Pollini, Pepe Jeans, and D&G. She has appeared on the cover of Vogue Italia, Vogue Germany, Vogue Espana, Vogue Paris, and Vogue Japan. Born on July 21, 1984 in Salzburg, Austria, she moved to New York City to start a three-month exchange student program in 2001, at age 17. She was discovered by a modeling agent while studying abroad in New York, USA. 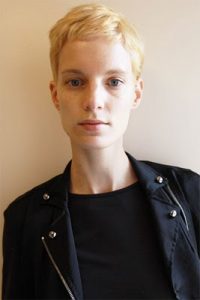 Iris Strubegger Facts:
*She was born on July 21, 1984 in Salzburg, Austria.
*She began her career at the age of 17.
*She was FMD’s “model of the month January 2008”.
*She appeared in the 2011 Pirelli Calendar photographed by Karl Lagerfeld.
*Vogue Paris named her one of the top thirty models of the 2000s.
*Her hobbies include mountain biking, jogging, skiing, and drawing.
*Follow her on Facebook and Instagram.