Dima Kandalaft is an actress and singer born in Damascus, Syria. She is known for TV and film roles such as Bab al-Hara, The Lover, Al-Mohallab, 24 Carat, Chaos, Doubt, Mariam and The Mother. Born on January 3, 1979, in Damascus, Syria, Dima graduated from Damascus University with a degree in economics. She began her career as a singer with the band “Al-Farah”. She studied acting at the Higher Institute for Dramatic Arts. Her first role as an actress was in the “Oghneyat al-kamar”, directed by Sahar Markada. She has been married Humam Al Jazaeri, a former Minister of Economy and Foreign Trade since May 30, 2015. 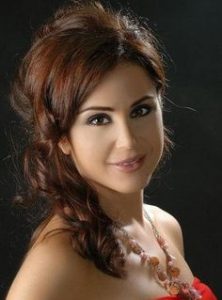