Isabela Merced is an American actress and singer. She is best known for her role as CJ Martin on the Nickelodeon series 100 Things to Do Before High School. She has also starred in the films Transformers: The Last Knight, Instant Family, Dora and the Lost City of Gold, and Sicario: Day of the Soldado. She voiced the lead character Kate in Nickelodeon’s animated television spinoff series Dora and Friends: Into the City! from 2014 to 2017. As a singer, Isabela released her debut album Stopping Time in September 2015. Born Isabela Yolanda Moner on July 10, 2001 in Cleveland, Ohio, to parents Katherine and Patrick Moner, she has an older brother named Jared and a younger brother Gyovanni. Isabela wanted to be an actress from a very young age, inspired by movies featuring Judy Garland and Shirley Temple and starting in local community theatre at age 6. She briefly dated Jace Norman in 2016. 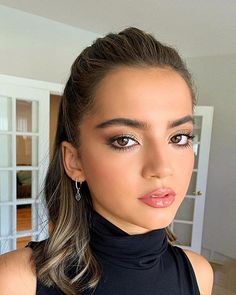 Isabela Merced Facts:
*She was born on July 10, 2001 in Cleveland, Ohio, USA.
*Her father was born in Louisiana and her mother was born in Lima, Peru.
*She made her Broadway debut at the age of 10 in a production of Evita.
*She made her film debut in The House That Jack Built (2013).
*She starred as the titular character of Dora in the 2019 film Dora and the Lost City of Gold.
*In 2019, she changed her stage name to Isabela Merced in honor of her late grandmother.
*She has a celebrity crush on Dave Franco and Dylan O’Brien.
*Spanish is her first language.
*Visit her official website: www.isabelamerced.com
*Follow her on Twitter, YouTube, Facebook and Instagram.