Isco is a Spanish football player who plays for Real Madrid and the Spanish national team as an attacking midfielder. He was named as one of the 30 best players in the world in 2017. Isco was part of the squad at the 2009 FIFA U17 World Cup and played for Spain in the 2018 FIFA World Cup. Born Francisco Román Alarcón Suárez on April 21, 1992 in Benalmádena, Spain, to parents Jenny Suárez and Paco Alarcón, he has a brother named Antonio Carlos Alarcón. Isco began his career at Valencia and joined Málaga in 2011. He moved to Real Madrid in June 2013, with whom he won four UEFA Champions League titles. He debuted for Spain’s senior national team in 2013. He has been in a relationship with actress Sara Sálamo Since 2017. He has two sons. 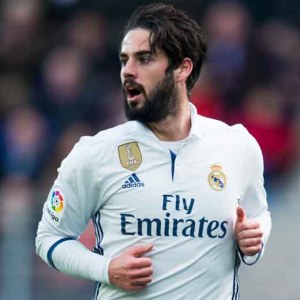