Isis Valverde is a Brazilian actress, best known for her starring role in the Brazilian soap opera “Ti Ti Ti.” She is also known for her performances in such telenovelas as O Canto da Sereia, Amores Roubados, Boogie Oogie, and A Força do Querer. She won a Capricho Award in 2008 and Melhores do Ano honors in both 2008 and 2013. Born Isis Nable Valverde on February 17, 1987 in Aiuruoca, Minas Gerais, Brazil, to parents Rosalba Nable and Rubens Valverde, she moved to Belo Horizonte when she was fifteen years old. She starred in several advertisements when she was sixteen years old, and moved to Rio de Janeiro at the age of eighteen to study theater. She made her soap opera debut in 2006 in the series Sinha Moca. She has been married to André Resende since 2018. They have a son together. 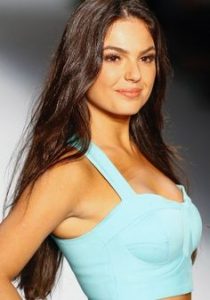 Isis Valverde Facts:
*She was born on February 17, 1987 in Aiuruoca, Minas Gerais, Brazil.
*She has Italian grandparents.
*She studied acting in Rio de Janeiro.
*She played the lead role of Marcela in the 2010 telenovela Ti Ti Ti.
*Visit her official website: www.isisvalverdeoficial.com.br
*Follow her on Instagram.