British actress who portrayed Amanda and later, Matilda Wormwood in the West End version of Matilda the Musical. Molloy made her film debut as Young Maleficent in the 2014 Disney fantasy film, Maleficent. From 2013 to 2014, Molloy played Bella Stone in the BBC soap opera EastEnders. Born Isobelle Rose Molloy on October 6, 2000 in Chelmsford, Essex, England, she was raised by her mother, Leanne Cornwell. She has one older brother named Joseph. Molloy started her career as a dancer when she was just three years old. She received a full scholarship to Redroofs Theatre School. 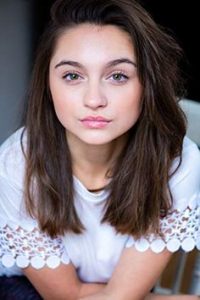 Isobelle Molloy Facts:
*She was born on October 6, 2000 in Chelmsford, Essex, England, UK.
*Her parents are James Molloy and Leanne Cornwell.
*She began dancing at the age of 3.
*She made her film debut in Maleficent (2014).
*She played the title role in the stage production of Matilda the Musical.
*She is the niece of Craig Cornwell.
*Follow her on Twitter and Facebook.