Italia Ricci is a Canadian-American actress. She is best known for her portrayal of Emily Rhodes on the ABC political drama Designated Survivor, and for her role as Maggie Winnock on the Cartoon Network live-action series Unnatural History. From 2014 to 2015, Ricci starred as April Carver in the ABC Family series Chasing Life, and played Allison in the 2014 Sony thriller The Remaining. She has also appeared in films for the Hallmark Channel, including Love in Winterland and Rome in Love. Born Stephanie Italia Ricci on October 29, 1986 in Richmond Hill, Ontario, Canada, to parents Terri and Nick Ricci, she is of Italian descent. Ricci graduated from Queen’s University in Canada. She started dating Canadian actor Robbie Amell in 2008 and the couple married on October 15, 2016. Together they have one daughter, Robert Amell V. 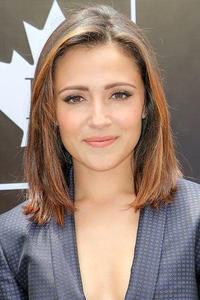 Italia Ricci Facts:
*She was born on October 29, 1986 in Richmond Hill, Ontario, Canada.
*She graduated from Queen’s University.
*She made her major acting debut in the 2007 American Pie direct-to-video film, Beta House.
*She is a big fan of Elvis Presley.
*Ricci and her husband actor Robbie Amell both became US citizens in January 2020.
*Follow her on Twitter, Facebook and Instagram.