Elvis Presley was an American singer and actor, widely known as the “King of Rock and Roll” and one of rock music’s dominant performers from the late 1950s until his death. He was born Elvis Aron Presley to Vernon and Gladys Presley in a two-room house in Tupelo, Mississippi, on January 8, 1935. His twin brother, Jessie Garon, was stillborn, leaving Elvis to grow up as an only child. His daughter Lisa Marie Presley also became a singer. 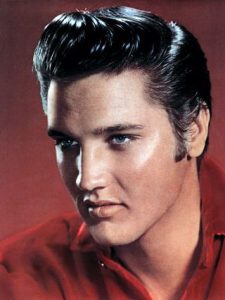 Elvis Presley Facts:
*He died with about $5 million in his bank account.
*He was one of the first people in the U.S. to own a “Betamax” system VCR.
*He inducted into the Country Music Hall of Fame in 1998.
*He earned a black belt in karate in 1960.
*He won three Grammy Awards, all for his gospel music.
*Loved football and often had three TVs set up at Graceland to watch all of the games in progress at the same time.
*He was suffered from chronic insomnia.
*He was an avid collector of guns and badges.
*He was the biggest taxpayer in the US.in 1973.
*Forbes.com named him the highest earning deceased celebrity for the sixth consecutive year in 2006.