J. R. Smith is an American professional basketball player who currently plays for the Los Angeles Lakers of the National Basketball Association. Smith played high school basketball at New Jersey basketball powerhouse Saint Benedict’s Preparatory School in Newark and was selected 18th overall by the New Orleans Hornets in the 2004 NBA Draft. He has also played for the Denver Nuggets and New York Knicks, as well as for the Zhejiang Golden Bulls of the Chinese Basketball Association. Smith won an NBA championship with the Cavaliers in 2016. Born Earl Joseph Smith III on September 9, 1985 in Freehold, New Jersey, to parents Ida and Earl Smith, Jr., he has three brothers and two sisters. Smith graduated from Millstone Middle School in 1999. He is married to Jewel Smith with whom he has a daughter, Demi Smith. He also has a daughter, Peyton from his previous relationship. 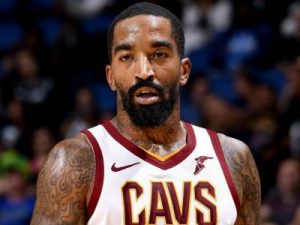 J. R. Smith Facts:
*He was born on September 9, 1985 in Freehold, New Jersey, USA.
*His full name is Earl Joseph Smith III.
*He was highly rated in football and also played baseball.
*He played his first official NBA game as a member of the New Orleans Hornets against the Dallas Mavericks in November 2011.
*He won the NBA Sixth Man of the Year Award in 2013.
*Follow him on Twitter and Instagram.