Nathalie Emmanuel is a British actress and model. She is best known for her portrayal of Sasha Valentine on the Channel 4 soap opera Hollyoaks, and for her role as Missandei on the HBO fantasy series Game of Thrones. Emmanuel played supporting roles in Maze Runner: The Scorch Trials and its sequel Maze Runner: The Death Cure. She also starred as Ramsey in the Fast & Furious films Furious 7, The Fate of the Furious, and F9. 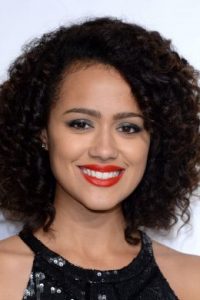 Nathalie Emmanuel Facts:
*She was born on March 2, 1989 in Southend-on-Sea, Essex, England, UK.
*She is of English, Saint Lucian, and Dominican descent.
*She began her acting career by appearing in a Vodafone commercial.
*She played Sasha Valentine on the Channel 4 soap opera Hollyoaks from 2006 to 2010.
*From 2013–2019, she played Missandei in the HBO fantasy series Game of Thrones.
*In 2015, Emmanuel appeared in the April issue of InStyle and GQ magazines.
*Follow her on Twitter, Facebook and Instagram.