Jacqueline Kennedy Onassis was the wife of President John F. Kennedy and a U.S. first lady. Born Jacqueline Lee Bouvier in Southampton, New York, on July 28, 1929, she is the elder daughter of Janet Lee and John Vernou Bouvier III. Her father, John Vernou Bouvier III, had French, English, German, and Scottish ancestry and her mother, Janet Lee. was of Irish descent. She is a 1951 graduate of the George Washington University with a Bachelor of Arts degree in French literature. She married 35th President of U.S. John F. Kennedy in September 1953 and they had three children, Caroline, John F. Jr., and Patrick. She later married Aristotle Onassis. 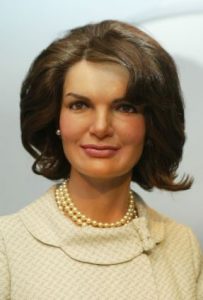 Jacqueline Kennedy Onassis Facts:
*First lady of the U.S., 1961-1963.
*Her parents divorced when she was six years old.
*She earned an Emmy award for her 1962 televised tour of the White House.
*She was fluent in Italian, French, and Spanish.
*Ladies Home Journal selected her as one of the 100 most important woman of the 20th century.