Anna Maria Muhe is a German actress born in Berlin. She played Kati in the 2002 German feature film Big Girls Don’t Cry. Her other notable roles in television and film include Not My Day and Love in Thoughts. She played Laura in the 2017 biographical film My Blind Date With Life. Her accolades include a Golden Camera Newcomer Award and a Shooting Stars Award. Born on July 23, 1985 in Berlin, Germany. she is the daughter of actors Ulrich Muhe and Jenny Grollmann, and younger half-sister of Jeanne Gröllmann. 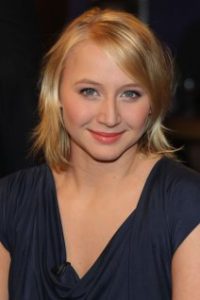 Anna Maria Muhe Facts:
*She was born and raised in Berlin, Germany.
*In 2001, she was discovered by director Maria von Heland in a Berlin club.
*Follow her on Instagram.