Jacquelyn Jablonski is an American model, best known for her work as a Victoria’s Secrets lingerie model. She appeared in Victoria’s Secret Fashion Show in 2010, 2011, 2012, 2013, 2014 and 2015, and has walked the runways for Shiatzy Chen, Balenciaga, YSL, Prada, Valentino and Chanel. She has appeared in campaigns for many important fashion houses and designers such as LOFT, Tommy Hilfilger, Emporio Armani, Carolina Herrera, Bruberry, Givenchy, Gap, Karl Lagerfeld, Yves Saint Laurent, H&M, Calvin Kein, and Dolce & Gabbana. Jablonski has appeared on several fashion magazine covers including Vogue, Elle, Marie Claire, Numero, Russh, Harper’s Bazaar, and Glass. She is represented by the agencies The Society Management, Elite Model Management, Ace Models, Select Model Management, Unique Model, and A Management. Born on April 4, 1991 in New Jersey, USA, to parents Kathleen L. (Phillips) and Thomas “Tom” Jablonski, she belongs to Polish, German, and Irish descent. Jablonski was scouted at age fifteen working in a café in her hometown of Fair Haven, New Jersey. In 2008, she graduated from Rumson-Fair Haven High School. She walked her first fashion show in New York for Brian Reyes. 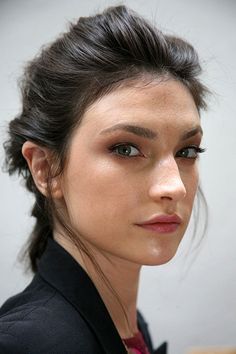 Jacquelyn Jablonski Facts:
*She was born on April 4, 1991 in New Jersey, USA.
*She is of Polish, German, and Irish descent
*She was discovered by an agent while working at a cafe when she was young.
*In 2008, she participated in Ford’s Supermodel of the World contest and finished 2nd runner-up.
*She has appeared in six Victoria’s Secret Fashion shows from 2010 through 2015.
*Follow her on Twitter, Tumblr, Facebook and Instagram.