Jaden Smith is an American actor, rapper, singer and songwriter. He is the son of actors Will Smith and Jada Pinkett Smith, and the older brother of actress and singer Willow Smith (b. 2000) and younger half-brother of Trey Smith (b. 1992). His first movie role was with his father in the film The Pursuit of Happyness (2006), for which Smith won the award for Breakthrough Performance at the 2007 MTV Movie Awards. He has also appeared in The Day the Earth Stood Still, The Karate Kid and After Earth. Jaden rapped alongside Canadian singer Justin Bieber in the song “Never Say Never.” His first mix tape, The Cool Cafe, was released on October 1, 2012. He dated Instagram star Sarah Snyder from 2015 to 2017. He also dated Odessa Adlon andKylie Jenner. 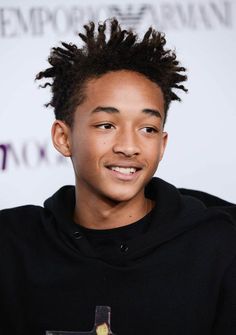 Jaden Smith Facts:
*He was born on July 8, 1998 in Malibu, California, USA.
*His parents are actors Will Smith and Jada Pinkett Smith.
*He is the older brother of actress and singer Willow Smith and younger half-brother of Trey Smith.
*He is the nephew of Caleeb Pinkett and grandson of Adrienne Banfield-Jones.
*He was home-schooled along with his younger sister, Willow Smith.
*He is a vegan.
*Visit his official website: www.jadensmith.com
*Follow him on Twitter, Facebook, YouTube and Instagram.