American Internet personality, make-up artist and model who became the first male ambassador for CoverGirl in 2016. Charles is best known for his videos on his self-titled YouTube channel ‘James Charles’, where he has more than 20 million subscribers and growing. He has been posting vlogs about makeup and beauty tutorials. Besides that, Charles is also active in Facebook, Instagram and Twitter. He has more than 19.9 million followers on Instagram and over 6.2 million followers on Twitter. He launched his beauty competition show Instant Influencer in April 2020. Born James Charles Dickinson on May 23, 1999 in Bethlehem, New York, his younger brother is fellow social star Ian Jeffrey. He graduated from Bethlehem Central High School in June 2017. 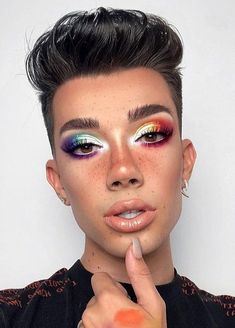