James Hetfield is an American guitarist, vocalist and main songwriter for heavy metal band Metallica, which he co-founded in 1981 with drummer Lars Ulrich. Metallica, known for hits like “The Memory Remains” and “Enter Sandman,” has won nine Grammy Awards and released ten studio albums, three live albums, four extended plays and 24 singles. James was named the eighth greatest metal guitarist by Joel Mclver in 2009. Hetfield was born on August 3, 1963, as James Alan Hetfield in Los Angeles, California, to Christian Science parents, a religion he would dismiss later on. He has been married to Francesca since August 17, 1997. They have three children; Cali, Castor, and Marcella. 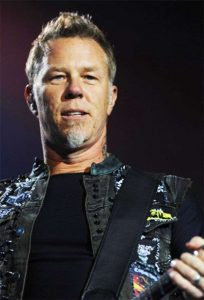 James Hetfield Facts:
*He is of English, and some Scots-Irish descent.
*He lost his mother to cancer at a young age.
*He is joined in Metallica by bassist Robert Trujillo, drummer Lars Ulrich and guitarist Kirk Lee Hammett.
*Rolling Stone placed Hetfield as the 87th greatest guitarist of all time.
*His wife, Francesca, is from Argentina and is a former costumer for his band Metallica.
*Currently, he resides in San Rafael, California.