Ivanka Trump is an American businesswoman, writer, heiress, former model, and daughter of U.S. President Donald Trump. In her role as Executive Vice President of Development & Acquisitions at The Trump Organization, Ivanka is involved with all aspects of the company’s real estate and hotel management initiatives. Ivanka was born on October 30, 1981 as Ivanka Marie Trump in New York City, New York, to Czech-American model Ivana Trump and Donald John Trump. Her father belongs to German and Scottish descent. She has been married to Jared Kushner since 2009. They have a daughter, Arabella and two sons, Joseph and Theodore. 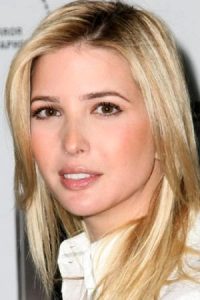 Ivanka Trump Education:
Attended The Chapin School in New York.
Graduated from Choate Rosemary Hall in Wallingford, Connecticut.
Enrolled at Georgetown University in Washington, D.C. for two years.
Completed her B.S. in Economics from Wharton School of Business at the University of Pennsylvania in 2004.

Ivanka Trump Facts:
*Her parents separated when she was ten years old.
*She is an advisor to President Donald Trump.
*She hosted the Miss Teen USA Pageant in 1997.
*She enjoys playing golf, tennis, and skiing.
*She placed in number 83 on the Maxim magazine Hot 100 of 2007 list.
*Follow her on Twitter, Facebook and Instagram.