James Hinchcliffe is a Canadian race car driver who debuted in the IndyCar Series in 2011, winning his first series race, the Honda Grand Prix of St. Petersburg, in 2013. He has won six races to date for Andretti Autosport and Schmidt Peterson Motorsports. Hinchcliffe last raced in the No. 26 Dallara-Honda for Andretti Autosport. In 2016, he competed on season 23 of the ABC series Dancing with the Stars, finishing in 2nd place. In 2020, Hinchcliffe joined NBC Sports as analyst for IndyCar races and Select IMSA races when he does not enter as a driver. Born James Douglas Meredith Hinchcliffe on December 5, 1986 in Oakville, Ontario, Canada, to parents Arlene and Jeremy Hinchcliffe, he was educated at McMaster University in Ontario, Canada. 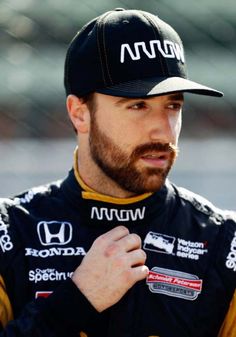 James Hinchcliffe Facts:
*He was born on December 5, 1986 in Oakville, Ontario, Canada.
*His full name is James Douglas Meredith Hinchcliffe.
*He raced in the A1 Grand Prix from 2006 to 2007.
*He started in IndyCar Series in 2011.
*He appeared on the 23rd season of Dancing With The Stars, where he finished in second place to Olympic gymnast Laurie Hernandez.
*Follow him on Twitter and Instagram.