Alexis Knapp is an American actress. She is best known for starring as Stacie Conrad in the Pitch Perfect film series, Alexis in the party film Project X, and Tori on the first season of the TBS comedy Ground Floor. Knapp also starred as Taylor Jaffe in the Tom Vaughan directed film So Undercover, and played Melissa in the independent short film Wracked. Born Alexis Merizalde Knapp on July 31, 1989 in Pennsylvania, to parents Marjorie and Bradford Elwood Knapp, she moved to Los Angeles when she was 18 years old and worked as a model before she started acting. She has a daughter, Kailani, with her ex-boyfriend, actor Ryan Phillippe. 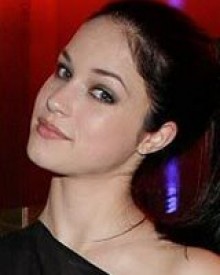 Alexis Knapp Facts:
*She was born on July 31, 1989 in Pennsylvania, USA.
*She grew up in the Outer Banks of North Carolina.
*She hosted a popular internet video series titled ‘Project Lore’ in 2008.
*She worked as a model before breaking into acting.
*She dated actor Ryan Phillippe in mid-2010, though they split up in September that year.
*Follow her on Twitter and Instagram.