Jamie Dornan is an actor, model, and musician who began his career as a model in 2001, and appeared in campaigns for Hugo Boss, Dior Homme, and Calvin Klein. Dornan played Sheriff Graham Humbert in the series Once Upon a Time from 2011 until 2013 and starred as serial killer Paul Spector in the crime drama series The Fall from 2013 to 2016. He has also appeared in the films Marie Antoinette, Anthropoid, Shadows in the Sun, and Fifty Shades franchise. 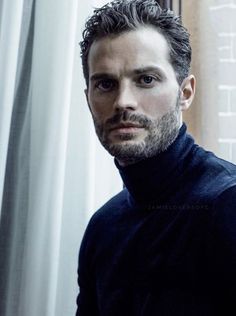 Born James Dornan on May 1, 1982 in Holywood, County Down, Northern Ireland, to parents Lorna and Jim Dornan, James is the youngest of three children and the only son. He was educated at Methodist College Belfast, and later attended Teesside University but dropped out and moved to London to train as an actor. He married actress Amelia Warner in April 2013. They have three children.

Jamie Dornan Facts:
*He was born on May 1, 1982 in Holywood, County Down, Northern Ireland, UK.
*His mother, Lorna, died of pancreatic cancer when he was just 16 years old.
*He began his career as a model in 2001.
*He became the face of the 2007 campaign for men’s cologne Dior Homme.
*He was a part of folk band Sons of Jim from 2006 until 2008.
*Dubbed “the Golden Torso” by The New York Times, he was ranked one of the “25 Biggest Male Models of All Time” by Vogue in 2015.
*He was in a relationship with actress Keira Knightley from 2003 to 2005.
*He is good friends with fashion journalist Hadley Freeman as well as actors Eddie Redmayne and Andrew Garfield.
*He is a huge Manchester United fan and is a season ticket holder.
*He enjoys golfing and reading in his free time.
*Follow him on Facebook and Instagram.