Shannon Larkin is an American musician, best known as the drummer of alternative-metal band Godsmack. He played drums for Godsmack for their albums Faceless, IV, their EP The Other Side, The Oracle, 1000hp, and When Legends Rise. Prior to Godsmack, Shannon was a member of Amen, Candlebox, Ugly Kid Joe, and Souls at Zero (formerly Wrathchild America). 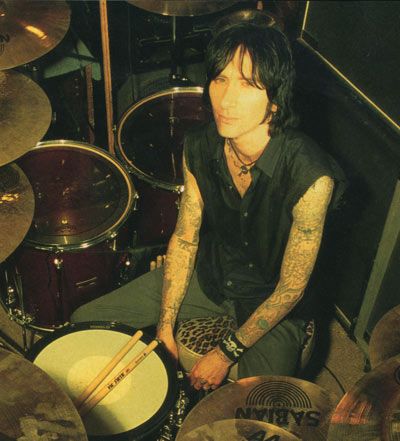 Shannon Larkin Facts:
*He was born on April 24, 1967 in Chicago, Illinois, USA.
*He started playing the drums when he was ten years old.
*His first major label band was Wrathchild America.
*He formed Wrathchild America in 1978, recording two albums for Atlantic Records before being dropped by the label.
*He joined Godsmack in 2002, replacing departing drummer Tommy Stewart.
*He is a koi and turtle enthusiast and keeps multiple koi and turtles at his home.
*He was influenced by Johnny Cash.
*In addition to a full sleeve on his left arm and tattoos on his right arm, Shannon has Amen tattooed across his knuckles and a hand ripping into the skin on his stomach.
*Visit his band’s official website: www.godsmack.com
*Follow him on Twitter, Facebook and Instagram.