Celebrity chef Jamie Oliver Biography, Family, Height, Weight, Age, Measurements will be discussed here. Jamie Oliver’s personal details can be checked here. He is best known for his casual approach to cuisine, which has led him to front numerous television shows and open many restaurants. 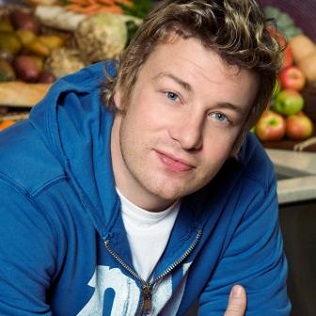 Jamie Oliver is a British celebrity chef, restaurateur, and cookbook author. He is best known for his television series television shows The Naked Chef, Jamie’s Kitchen, Jamie’s Quick & Easy Food and Jamie Oliver’s Food Revolution and as author of a number of cookbooks with a variety of culinary themes.

Jamie Oliver Facts:
*He was born on May 27, 1975 in Clavering, United Kingdom.
*He worked in his parents’ restaurant as a child.
*His first job was as a pastry chef for Antonio Carluccio’s restaurant Neal’s Yard.
*He was made a Member of the Order of the British Empire for “services to the hospitality industry” in June 2003.
*He married former model and writer Juliette Norton (Jools) in July 2000. They have five children.
*Visit his official website: www.jamieoliver.com
*Follow him on Twitter and YouTube.