Jane Krakowski is an American actress and singer. She is best known for her portrayal of Jenna Maroney on NBC’s 30 Rock, for which she received four Primetime Emmy Award nominations for Outstanding Supporting Actress in a Comedy Series, and for her role as Elaine Vassal on Ally McBeal, for which she was nominated for a Golden Globe Award. From 2015 to 2020, Krakowski starred as Jacqueline White in the Netflix comedy series Unbreakable Kimmy Schmidt, for which she received her fifth Primetime Emmy Award nomination. She also regularly performs on the stage and won a Tony Award for her performance in the Broadway revival of Nine and an Olivier Award for Guys and Dolls in London’s West End. She has also played prominent roles in the films The Flintstones in Viva Rock Vegas, Ice Age, Alfie, Open Season, Pixels, and The Willoughbys. 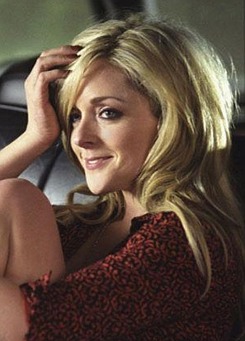 Born Jane Krajkowski on October 11, 1968 in Parsippany-Troy Hills, New Jersey, to parents Barbara and Ed Krajkowski, she is of French Canadian, Scottish and Polish descent. Krakowski attended the Mason Gross School of the Arts of Rutgers University. She was in a relationship with clothing-designer Robert Godley from 2009 to 2012. They had a son named Bennett in April 2011.

Jane Krakowski Facts:
*She was born on October 11, 1968 in Parsippany-Troy Hills, New Jersey, USA.
*She started taking ballet lessons at the age of 4.
*She studied drama at HB Studio in Greenwich Village in New York City.
*She played Jenna Maroney on the NBC sitcom 30 Rock.
*She made her feature film debut as Cousin Vicki Johnson in the 1983 road comedy National Lampoon’s Vacation.
*She was engaged to clothing-designer Robert Godley.
*She was a childhood classmate of astronaut Garrett Reisman.