Janella Salvador is a Filipino television and movie actress and singer. She is best known for television roles as Nikki on Be Careful with My Heart, Felynit on Maalaala Mo Kaya and Sophie Z. Cepeda in ABS-CBN’s Oh My G!. For her performance in Be Careful with My Heart, she won a 2013 PMPC Star Award. She played Ella Jimenez in the 2015 film, Haunted Mansion, for which she won the 32nd PMPC Star Awards for Movies – New Movie Actress of the Year. She had three songs in OPM Top 10 and garnered a platinum record album. Born Janella Maxine Desiderio Salvador on March 30, 1998 in the Philippines, she is the daughter of singer Juan Miguel Salvador and actress Jenine Desiderio. She has one brother named Russell. She did her schooling from St. Paul College, Pasig. She had her film debut in Haunted Mansion, one of the top grossers in 2015 Metro Manila Film Festival. 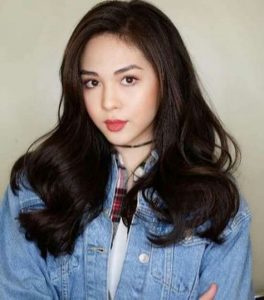 Janella Salvador Facts:
*She was born in Manila, Philippines on March 30, 1998.
*Her parents separated when she was four years old.
*She began singing at a young age.
*Follow her on Twitter, Facebook and Instagram.