Born Janine Marie Lindemulder on November 14, 1968 in La Mirada, California, Janine’s ancestry includes Dutch, German, French, and Native American. She started her career in the adult entertainment industry in 1992, at the age of 24. In 2000 she retired from making adult films. However, in an unexpected move, she returned to the industry in 2004 after the birth of her daughter. In 2006 she again retired from the adult industry. She has appeared in 201 adult films. In 1997, Janine played wife of a camp director in the Howard Stern film Private Parts. She was the cover model for blink-182’s 1999 album Enema of the State. [© celebsfacts.com] Janine is with the height 5 feet 8 inches in tall. She wears a size 8 shoe and her zodiac sign is Scorpio. She has been married three times and has two children. 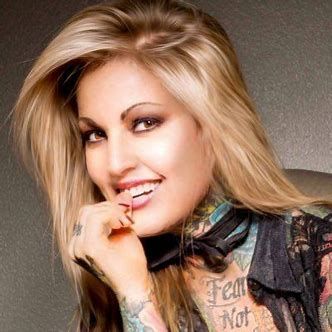 Janine Lindemulder Facts:
*She was born on November 14, 1968 in La Mirada, California, USA.
*She is the cousin of Kelly Madison and cousin-in-law of Ryan Madison.
*She was the Penthouse Pet of the Month for December 1987.
*She made her adult film debut in 1992.
*She has tattoos: Back Of Neck, Sleeve On Right Arm, Sleeve Of Roses (“Tyler” And “Summer”) Lower Left Arm, Alis Volat Propis (“She Flies With Her Own Wings”) Lower Belly; Large Heart Small of Back.
*Visit her official website: www.freejanine.com
*Follow her on Twitter.