Janis Timma is a Latvian professional basketball player who plays for BC Khimki of the VTB League and the EuroLeague, on loan from Olympiacos. He also plays for the Latvia national basketball team. With Latvia’s senior team, he has played at the 2015 EuroBasket, the 2016 Belgrade FIBA Olympic Qualifying Tournament, and the 2017 EuroBasket. Standing at 2.03 m tall, and a weight of 103 kg, Timma plays mainly at the small forward position. Timma played for Latvia’s U18 team that won a bronze medal at the 2010 FIBA Europe U18 Championships. Born on July 2, 1992 in Krāslava, Latvia, his father Raitis Timma is a basketball coach who played basketball in Gulbene in his time. Timma grew up playing basketball in his hometown of Krāslava, and moved to Rīga, at age 15. He declared for the 2013 NBA draft, and was selected with the last pick (60th overall) by the Memphis Grizzlies. He has been married to Sana Timma since 2016. 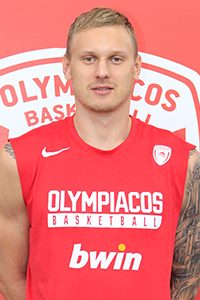 Janis Timma Facts:
*He was born on July 2, 1992 in Krāslava, Latvia.
*His father, Raitis, trained and played basketball in Gulbene in his time.
*In 2011, he made his professional debut for BK Liepajas Lauvas in the Latvian Basketball League.
*He played for Liepājas Lauvas for the 2011–12 season.
*He declared for the 2013 NBA draft in 2013.
*He signed a two-year contract with the Russian team Zenit St. Petersburg in June 2015.
*He signed a three-year deal with the Spanish club Baskonia in June 2017.
*Follow him on Instagram.