Karlie Kloss is an American model, best known for her work as a Victoria’s Secrets lingerie model. She was a Victoria’s Secret Angel from 2013 to 2015. She has appeared in campaigns for many important fashion houses such as Donna Karan, Marc Jacobs, Dolce and Gabbana, Nike, Versace, Calvin Klein and Estee Lauder. In 2015, she starred as Knockout in Taylor Swift’s Bad Blood music video. Vogue Paris named her one of the top 30 models of the 2000s. Born Karlie Elizabeth Kloss on August 3, 1992 in Chicago, Illinois, USA, she is the daughter of Tracy and Kurt Kloss and sister to Kristine, Kimberly and Kariann. She belongs to German, Danish, and Polish descent. She was discovered at the age of 13 at a local charity fashion show in St. Louis. She married her long time boyfriend Joshua Kushner, the founder of Thrive Capital on October 18, 2018. 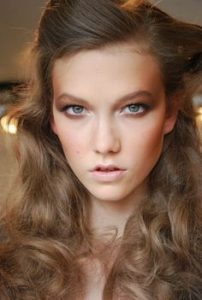 Karlie Kloss Facts:
*She was born on August 3, 1992 in Chicago, Illinois, USA.
*She moved to St. Louis at age 2.
*She has three sisters: Kimberly, Kristine and Kariann.
*She was educated at Webster Groves High School in Webster Groves, Missouri.
*She made her debut in the Victoria’s Secret Fashion Show in 2011.
*She was a Victoria’s Secret Angel from 2011 to 2014.
*She posed n*de for Vogue Italia in December 2011.
*She is also an avid computer programmer.
*She is close friends with model Karmen Pedaru and filmmaker Casey Neistat.
*She has a puppy named Joe.
*Her hobbies include cookies, biking, and ballet.
*In 2008, Kloss was named the best model by People’s magazine.
*She is best friends with Taylor Swift.
*In 2012, she began dating Joshua Kushner, the founder of Thrive Capital.
*Visit her official website: www.karliekloss.com
*Follow her on Twitter, Facebook and Instagram.