January Jones is an American actress and model. She is best known for her portrayal of Betty Draper on the TV series Mad Men, for which she was nominated for two Golden Globe Awards for Best Actress – Television Series Drama and a Primetime Emmy Award for Outstanding Lead Actress in a Drama Series. From 2015–2018, Jones played Melissa Chartres in the Fox comedy television series The Last Man on Earth. She is also known for her starring roles in the films American Wedding, We Are Marshall, The Boat That Rocked, Unknown, Seeking Justice and X-Men: First Class. Born January Kristen Jones on January 5, 1978 in Sioux Falls, South Dakota, to parents Marvin Jones, an exercise physiologist; and Karen Cox, a store manager, she is the sister of Jina Jones and Jacey Jones. She was educated at Roosevelt High School. Jones dated singer Josh Groban from 2003 to 2006 and Jason Sudeikis from July 2010 to 2011. She gave birth to a son, Xander Dane Jones, on September 13, 2011. She began dating actor Will Forte in 2015. 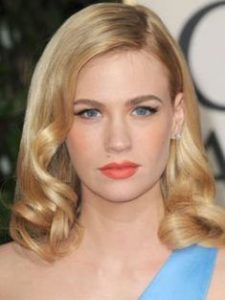 January Jones Facts:
*She was born on January 5, 1978 in Sioux Falls, South Dakota, USA.
*She’s named after January Wayne, a character in Jacqueline Susann’s potboiler novel turned film, Once Is Not Enough.
*She worked as a counter girl at Dairy Queen after school
*She starred as Betty Draper in Mad Men from 2007 to 2015.
*She was featured on the cover of “The Hot Issue” of British GQ magazine in May 2009.
*In November 2009, she hosted an episode of Saturday Night Live.
*She was named #16 Sexiest Woman in the world by the Spanish version of DT magazine.
*Her name is the same as her month of birth.
*Follow her on Instagram.