Caroline Wozniacki is a Danish former World No. 1 professional tennis player. Turning professional in 2005, she won 30 WTA singles titles, including six in 2010 and 2011, the most in a year by a WTA player from 2008–2011. She was runner-up at the 2009 US Open and the 2010 WTA Tour Championships to Kim Clijsters, and at the 2014 US Open to Serena Williams. She won the 2006 Wimbledon girls’ singles title and also holds two WTA titles in doubles. Wozniacki earned her first grand slam victory after winning the Australian Open in 2018. She retired from professional tennis in January 2020. Born on July 11, 1990 in Odense, Denmark, to Polish Catholic immigrant parents Anna and Piotr Woźniacki, her older brother, Patrik Wozniacki, is a former professional footballer in Denmark. She rose to fame with a series of junior championship wins when she was in her mid-teens. She dated Northern Irish professional golfer Rory McIlroy from 2011 until 2014. On November 2, 2017, Wozniacki became engaged to former NBA champion David Lee, whom she married on June 16, 2019 in Tuscany. 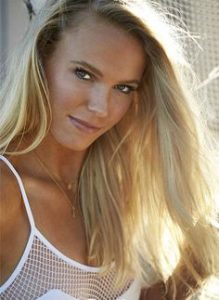 Caroline Wozniacki Facts:
*She was born on July 11, 1990 in Odense, Denmark.
*Her parents are both of Polish descent.
*She turned professional in 2005.
*She reached the finals of the US Open in 2009 and 2014.
*She won her maiden Grand Slam title at the 2018 Australian Open.
*She is the first Danish person to win Grand Slam.
*She was engaged to golfer Rory McIlroy until 2014.
*She speaks Danish, English and Polish fluently.
*As of Jan 2017, her Net Worth is $19 million.
*She is best friends with her fellow Danish tennis player Malou Ejdesgaard.
*She is close friends with Serena Williams, Angelique Kerber and Agnieszka Radwańska.
*Visit her official website: www.carolinewozniacki.com
*Follow her on Twitter, Facebook and Instagram.