Jason Priestley is a Canadian-American actor best known for his role as Brandon Walsh on the television series Beverly Hills, 90210, a role which catapulted him to recognition in the early 1990s. He is also known for his starring role as Richard ‘Fitz’ Fitzpatrick in the show Call Me Fitz. He played Clive Noble on the USA Network hit series Psych. Jason was born as Jason Bradford Priestley in Vancouver, British Columbia, Canada. He has twin sister named Justine Priestley, who is also an actress. On May 14, 2005, He married Naomi Laowde. They have two children; daughter, Ava and son, Dashiell. He was previously married to Ashlee Petersen (1999-2000). 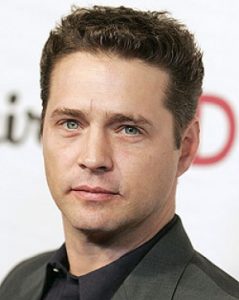 Jason Priestley Facts:
*One of People magazine’s 50 Most Beautiful People in the World (1991).
*He is the twin brother of actress Justine Priestley.
*He plays hockey.
*His mother is actress, Sharon Kirk.
*Follow him on Twitter.