Javeria Abbasi is a Pakistani actress of film and television and former model who portrayed Zaitoon Bano/ Mutarba in the TV series Dil, Diya, Dehleez. She played Shanzay in Kaash Main Teri Beti Na Hoti. Her other television credits include Thori Si Khushiyan, Najia, Doraha, Andata, Sotayli, Tere Liye, “Darmiyan” Phool Wali Gali, Phir Kho Jayye Na, Maamta and Chahatain. For her work in Najia, she was nominated for the “best actress” title in the Lux Style Awards. She made her film debut in 2011 with the Pakistani film Saltanat. Born on December 29, 1972 in Karachi, Pakistan to Zubair Abbasi, she has one sister named Anoushay. She is married to Pakistani actor and director Shamoon Abbasi with whom she has a daughter named Anzela Abbasi. 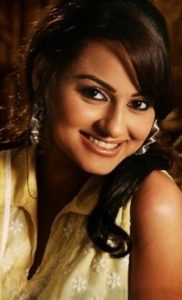 Javeria Abbasi Facts:
*She was born in Karachi, Pakistan on December 29, 1972.
*She appeared with the singer and actor Ali Haider in PTV Long Play Pyar Agar Kabhi Phir Hua.
*Her favourit Singers are Abida Parveen and Nusrat Fateh Ali Khan.