Born Kira Lee Orsag in Orange County, California, USA on September 22, 1989, she belongs to Czech, English and German descent. Dani attended an art school for about two years, but dropped out. Her first job was working in a medical office at age fifteen. She started her career in the adult entertainment industry in January 2011, and joined the agency OC Modelling. Among the notable companies Dani has appeared in Filly Films, Wicked Pictures, FM Concepts, Girlfriends Films, and Pulse Distribution. She won an AVN Award in 2013 and an XBIZ Award in 2014. 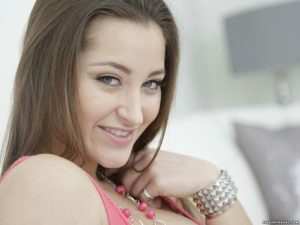 Dani Daniels Education:
She attended an art school for about two years, but dropped out.

Dani Daniels Facts:
*She was born on September 22, 1989 in Orange County, California, USA.
*She worked as a glamor model before she began a career in the adult entertainment industry as a nude artistic model.
*She was named as DanniGirl of the Month for February 2012.
*She was the Penthouse Pet of the Month for January 2012.
*She’s bisexual.
*She is an avid sports enthusiast.
*She enjoys football, softball, volleyball, soccer, tennis, and track and field.
*Visit her official website: www.danidaniels.com
*Follow her on Twitter and Instagram.