Jay Ajayi is a British-born American football running back who is currently a free agent. He played college football at Boise State and was drafted in the fifth round of the 2015 NFL Draft with the 149th overall pick by the Miami Dolphins. He won Super Bowl LII in his first year with the Eagles. Born on June 15, 1993 in London, United Kingdom, to Nigerian parents Kemi and Ibi Ajayi, he moved to Maryland in the US in 2000 when he was just 7 years old. He attended Frisco (Texas) Liberty High School where was named Collin County Player of the Year. 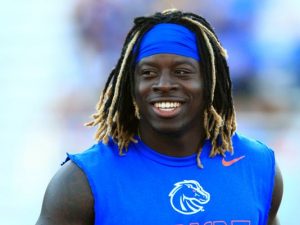