Jeanine Pirro is an American television personality, author and former prosecutor, judge, and politician. She is best known as a host of Fox News Channel’s Justice with Judge Jeanine. She was a frequent contributor to ‘The Today Show’ on NBC, ‘Good Morning America’ on ABC, ‘The Early show’ on CBS, ’60 Minutes’, ’48 Hours’, ‘Nightline’, ‘The View’, and ‘The O’Reilly Factor’. Pirro was the first female judge elected in Westchester County, New York. She release her first book, titled “To Punish and Protect: A DA’s Fight Against a System That Coddles Criminals” in 2002, by Jeanine with Catherine Whitney. Born Jeanine Ferris on June 2, 1951 in Elmira, New York, USA, to Lebanese parents Esther and Nasser Ferris, she has a sister named Lulu. She attended Notre Dame High School and University at Buffalo, and obtained her J.D. degree at Albany Law School of Union University in 1975. In 1975, she married Albert Pirro, although they divorced in 2013. She has two children. 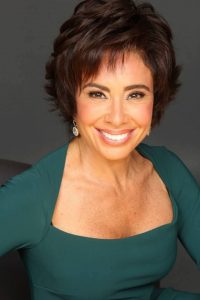 Jeanine Pirro Facts:
*She was born on June 2, 1951 in Elmira, New York, USA.
*Her mother, Esther, was a department-store model, and her father, Nasser, was a mobile-home salesman.
*She received her J.D. degree from Albany Law School in 1975.
*She used to work as a telephone operator.
*People Magazine named her one of the top 50 Most Beautiful People in the World in 1997.
*She has three dogs, a Huskie named Lancelot, and two poodles; and two pigs.
*Visit her official website: www.jeaninepirro.com
*Follow her on Twitter, Facebook and Instagram.