Buzz Williams is an American basketball coach and the current head coach for the Virginia Tech Hokies men’s basketball team. Prior to Virginia Tech, he served as head men’s basketball coach at Marquette from 2008 to 2014 and at New Orleans from 2006 to 2007, and as an assistant coach at the Texas-Arlington, Texas A&M–Kingsville, Northwestern State, Colorado State, and Texas A&M. Born Brent Langdon Williams on September 1, 1972 in Greenville, Texas, USA, he grew up in Van Alstyne, Texas. He earned a bachelor’s degree in kinesiology from Oklahoma City University in 1994 and a master’s degree in the same field at Texas A&M University–Kingsville in 1999. He is married to Corey Norman with whom he has two daughters Addyson and Zera and two sons Calvin and Mason. 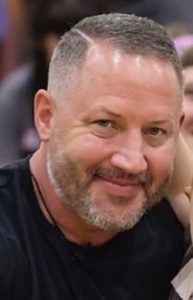