Actress Jayma Mays was born Jayma Suzette Mays on July 16, 1979 in Grundy, Virginia, the daughter of James Mays and Paulette Norris Mays. She was raised in Grundy, Virginia, with her older brother and sister. Her father was a high school teacher at Grundy Senior High School for 7 years, before spending 25 years working in the coal-mining industry. He is now retired and lives with Jayma’s mother in Bristol. Mays belongs to English, Scottish, Welsh and German descent. She is known for playing Emma Pillsbury on the Fox musical series Glee, her recurring role as Charlie Andrews on the NBC sci-fi serial Heroes, and for starring in the films Paul Blart: Mall Cop and The Smurfs. From October 2013 until November 2014, she played the role of Debbie on the sitcom The Millers. She has been married to Adam Campbell since 2007. They have a son named Jude Jones. She is with the height 5 feet 4 inches in tall. She wears a size 6.5 shoe and her zodiac sign is Cancer. 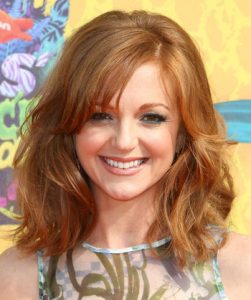 Jayma Mays Facts:
*She is of English, Scottish, Welsh and German descent.
*She has appeared on two major network television series, Heroes (2006) and Ugly Betty (2006).
*She met her husband Adam Campbell on the set of Epic Movie in 2007.
*In 2004, she made her first television appearance on Joey.
*Follow her on Twitter and Instagram.