English television and film actress Nicollette Sheridan was born Colette Sheridan on November 21, 1963 in Worthing, Sussex, England, the daughter of Sally and Arthur Sheridan. Her mother was 16 when she had her. She is best known for playing Edie Britt on the ABC dramedy series Desperate Housewives and as Paige Matheson of the CBS primetime soap opera Knots Landing. She is with the height 5 feet 7½ inches in tall. She wears a size 9 shoe. Her zodiac sign is Scorpio. 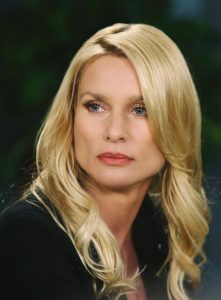 Nicollette Sheridan Facts:
*She speaks Greek fluently.
*Half-sister of Nick Savalas
*She has a golden retriever named Oliver.
*She is of Punjabi descent through her great-grandmother.
*She is a vegetarian and believes that any life, big or small, deserves the right to live.
*Chosen by People magazine as one of the 50 Most Beautiful People in the world. [1990]
*She was in a long-term relationship with singer Michael Bolton twice, first from 1992 to 1995 then again from 2005 to 2008.
*Follow her on Twitter and Instagram.