Jeff Hardy is an American professional wrestler. He is best known for his performance during his first run in the World Wrestling Federation (WWF). He rose to prominence in the WWE after wrestling with the Organization of Modern Extreme Grappling Arts, which he founded with his brother, Matt Hardy. His debut match was on May 23, 1994. Jeff was born Jeffrey Nero Hardy on August 31, 1977 in Cameron, North Carolina, USA to Gilbert and Ruby Moore Hardy. His older brother, Matt Hardy, is also professional wrestler. On March 9, 2011, he married Beth Britt. They have two children. Together they have two daughters, Ruby Claire and Nera Quinn. 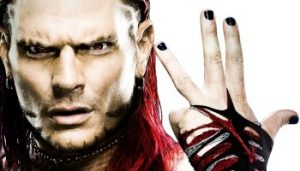 Jeff Hardy Facts:
*He and his brother Matt Hardy both are professional wrestlers.
*His mother died of brain cancer when he was 9 years old.
*He became the youngest WWE Intercontinental champion at 23.
*Follow him on Twitter, Facebook and YouTube.