Jenna Coleman is a British actress and model. She is best known for television roles as bad girl Jasmine Thomas in the soap opera Emmerdale, Clara Oswald, companion to the Eleventh and Twelfth Doctors in the science fiction series Doctor Who, and Queen Victoria in the ITV biographical drama series Victoria. She portrayed Katrina Clark in Me Before You. Born Jenna-Louise Coleman on April 27, 1986 in Blackpool, England, to Karen and Keith Coleman, she has an older brother named Ben. She was educated at Arnold School, where she was head girl. Her first major film role was in Captain America: The First Avenger in 2011. She was previously in a relationship with Game of Thrones actor Richard Madden. In 2016, she began dating Tom Hughes. 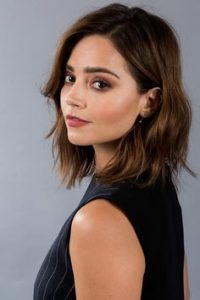 Jenna Coleman Facts:
*She was born on April 27, 1986 in Blackpool, Lancashire, England.
*She was voted Best Female Guest Star for Season 7A for Asylum of The Daleks by readers of Doctor Who Magazine.
*She is the ambassador for ‘One To One Children’s Fund’, a non-profit organization.
*She is close friends with Peter Capaldi, Sammy Winward, Perdita Weeks.
*Follow her on Twitter, Facebook and Instagram.