Cissy Houston is an American soul and gospel singer who sang backup for such artists as Elvis Presley and Aretha Franklin, before launching a solo career. Houston is the recipient of several accolades, including two Grammy Awards. The youngest of eighth children, Houston was born in Newark, New Jersey, USA as Emily Drinkard. She is the daughter of Nitcholas and Delia Mae Drinkard, and mother of singer Whitney Houston, aunt of singers Dionne and Dee Dee Warwick, and a cousin of opera singer Leontyne Price. She began her singing career in 1938, joining her sister Anne and brothers Larry and Nicky in the gospel singing group the Drinkard Four. She was married to Freddie Garland from 1955 to 1956 and John Russell Houston from 1959 to 1990. 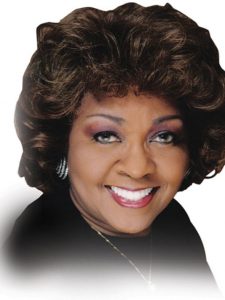 Cissy Houston Facts:
*She was born on September 30, 1933 in Newark, New Jersey, USA.
*She is the mother of Whitney Houston and Gary Houston.
*She performed backup on Van Morrison’s song “Brown Eyed Girl.”
*She is friends with Della Reese, and Aretha Franklin.
*She is the grandmother of Bobbi Kristina Brown and Rayah Houston.